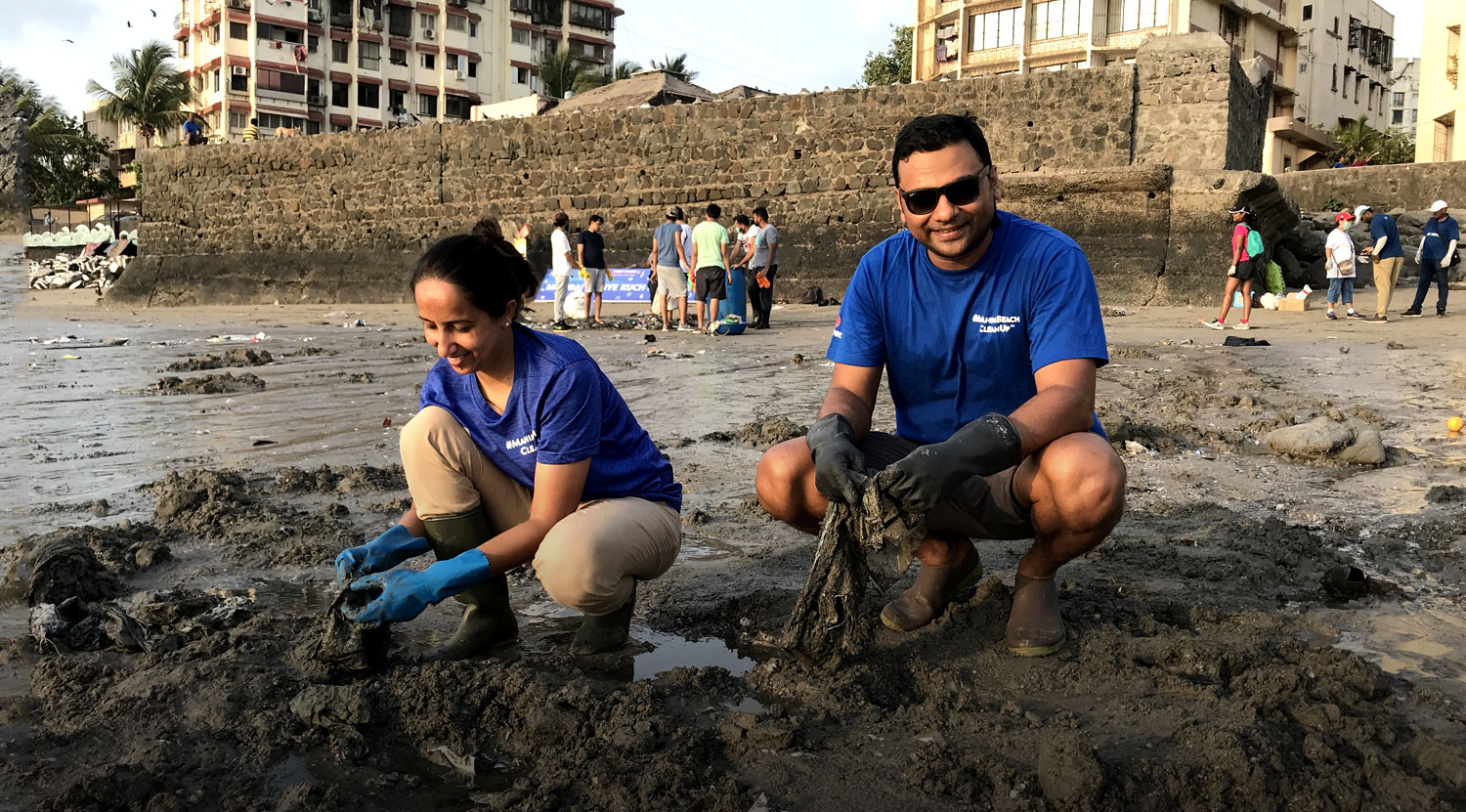 If you’re pet parents, you know too well the lure of living by the beach. In a city that offers little space to walk for its citizens, let alone pets, the beach seems like just the answer to all the stroll struggles. CeeLo and Gabru could finally run carefree, we’d thought. The reality of our neighborhood beach however, was very different. To begin with, there was hardly a beach to speak of – it lay buried under 3 and a half feet of marine litter. Think of an article – any article and you could be sure to find it on our ‘beach’. Plastic bottles/bags, backpacks, shoes, straws, glasses, toothbrushes, syringes, milk packets, photo frames, books, toys, clothes – the list is endless.

Where do we even start?

Our first instinct after moving in was to do what most responsible citizens might’ve done – call up the local Municipal Corporation helpline. So we did. Once, twice, three times, a dozen times. But when it garnered no concrete response, we knew we had to give it a go ourselves. That we’re both finicky about cleanliness added a sense of urgency. The first day was daunting, of course. We were wearing our rubber gloves and gumboots but we clearly weren’t prepared enough. We stood there stupefied by the piles of rubbish. So we decided to start small. We chose a small patch of land and channeled all our energies to that piece alone. At the end of two hours, we hadn’t accomplished much, but the patch allowed a thin stream of water to flow through it. Even though confined to perhaps one square metre of land, the beach looked like it was breathing again.

‘Even though confined to perhaps one square metre of land, the beach looked like it was breathing again.’

Seeing the two of us knee-deep in the litter, a couple of people from our building joined us. Occasionally a few more people volunteered, but on most weekends, it was just the two of us. Getting volunteers regularly remained a huge challenge. Our social media pages documented our journey since day one and that helped to get the word out. Cleaning thus became a routine, a habit and a lifestyle. Our weekend plans are now locked down for as long as we can think! As the months passed by, schools, colleges and organisations started volunteering in huge numbers along with a few dedicated volunteers. The Koli village living along the beach got involved too. What a beautiful feeling it is to gather with complete strangers unified by one common goal – cleaner oceans!

‘Cleaning thus became a routine, habit and a lifestyle.’

Over the months, we have cleared the beach of more than 1,000 tonnes (10,00,000 lakh kilos) of rubbish. Some of the plastic waste has been sent for recycling and we’re constantly exploring newer ways to direct as little as possible to the landfills. While the sight of a relatively cleaner beach and the support of other citizens is a reward in itself, we were humbled when in June 2018, our efforts were felicitated by the UN Environment Programme.

We marked our first anniversary with the launch of the OPENDOOR Fest. An idea very close to our hearts, OPENDOOR seeks to engage citizens with their public places by making the latter cultural hubs featuring music, song, dance, art etc. A place that embraces one and all – for free – and revives open spaces while making citizens feel responsible for their upkeep and care. We have so far, had two editions of the OPENDOOR Fest at the Mahim Beach and look forward to many more mornings and evenings of music and art.

Cleaning the beach has brought us face-to-face with the magnitude of ocean litter that threatens our marine life and has made us conscious of our own consumption. It has also restored our faith in the power of will and the potential of a dedicated bunch of doers. And while inspiring stories are all around if you look, we find deep resonance in the words of environmentalist and Polar explorer Robert Swan – “The greatest threat to our planet is the belief that someone else will save it.”

‘Cleaning the beach has restored our faith in the power of will and the potential of a dedicated bunch of doers.’

Given the plight of our seas, it is impossible to put a deadline to the cleaning process. Our seas are unfortunately a dumping ground for the city’s waste brought in by the Mithi river and the other storm water drains. Only a sustained and dedicated effort can tackle the issue at hand. Most importantly, a shift in the mindset can truly facilitate change. Our efforts right now, apart from conducting the existing clean-ups include getting the local authorities to pledge greater support, urging the government to lock down a timeline to fix Mithi and install a filtration system at the confluence, trying to pool in modern equipment to clean the beach and spreading awareness about the hazards of plastic waste and marine litter and the importance of recycling.

We also wish to make the lifestyle shift from convenient to conscious a seamless one, for anyone who wants to start on the path to sustainability. This sowed the seeds for Ethico. Through Ethico, we wish to educate people about the impact of our actions on the climate, create awareness about the environmental challenges that plague our times, facilitate action against the climate crisis and help people engage in conscious consumption. It’s a long process and we hope we’ll find many more partners along the way.

Join us at the beach!